President Jacob Zuma is adamant he will deliver his State of the Nation address (Sona) on Thursday, despite calls for him to step down.

The Mail & Guardian has reliably learned that Zuma told senior ANC leaders during a meeting at his official residence this week that he would reject any attempts to force him out as the country’s highest office before Sona.

“He [Zuma] has made it clear he would not accept any decision influenced by any ‘counter-revolutionaries’, including opposition parties. He said if it meant he should face impeachment and lose all his presidential benefits, he was prepared for that as a matter of principle,” said an ANC insider close to Zuma.
END_OF_DOCUMENT_TOKEN_TO_BE_REPLACED 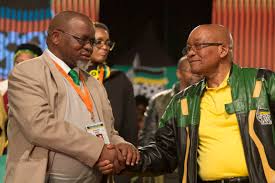 If corruption charges against Jacob Zuma were to be re-enrolled, a fraught responsibility would fall on ANC secretary general Gwede Mantashe. Under the ANC’s constitution, the party’s secretary general “may suspend” a member or office bearer indicted to appear in a court if that seems necessary — “on the authority of” the party’s national executive..
END_OF_DOCUMENT_TOKEN_TO_BE_REPLACED