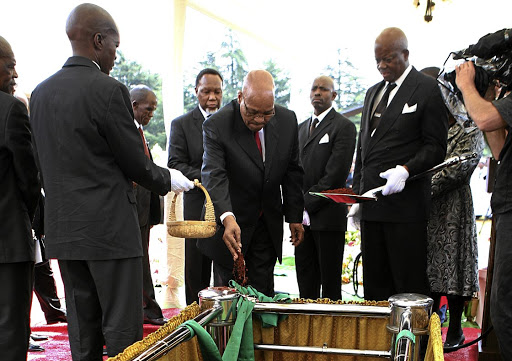 Jacob Zuma drops soil onto the grave of veteran journalist Zwelakhe Sisulu at the West Park Cemetery in Johannesburg. Sisulu was imprisoned during apartheid for voicing opposition to the National Party.

The coordinated, yet clumsy and moronic, attempt through the weekend by the State Security Agency and SA Revenue Service to stop distribution of Jacques Pauw’s explosive book, The President’s Keepers, tells us several things about Jacob Zuma’s South Africa.

First, it reminds us again of what many of us wrote way back in 2007 when the man came to power: he would use the intelligence services ruthlessly to control the state and undermine the constitution.

The man who used to lead the ANC’s intelligence network would always cast aside our constitutional principles and go dark to protect himself while making his children and cronies rich. He has proved us right.

Pauw’s book is about exactly this: how the security establishment, from SSA to the Hawks, through to crime intelligence and SARS, has been ruined and then turned into tools for Zuma’s protection and enrichment.

Tom Moyane, the SARS commissioner, has fast-tracked Zuma’s friends the Guptas’ tax refunds, has folded his hands while the Gupta e-mails have indicated clear criminality on their part and has failed to adequately explain his relationship with them and their “friend”, Duduzane Zuma.

The Hawks, SARS and the NPA are so deeply and comprehensively captured by Zuma that South Africans have to sit and watch as the FBI, UK authorities and other jurisdictions start investigating them.

Moyane and NPA chief Shaun Abrahams have not lifted a finger to act. They only ever shift in their seats when Zuma is under threat of going to jail – then they are as fast as greased lightning.

Zuma has gone even further in his ruinous project.

When he realised threats to him also emanated from the public protector’s office, he swiftly ensured that a former SSA analyst, Busisiwe Mkhwebane, filled that post.

It is no coincidence that Mkhwebane was quick to tweet that Pauw’s book should not be bought.

Mkhwebane is many things, but an objective analyst of Zuma she is not. That is why he is so desperate that she become the person to restart investigations into state capture.

It has now become clear that she was installed in that office to do one thing and one thing only: whitewash Zuma. A state capture probe by her would return one finding: Zuma not guilty.

The second thing we can learn from the sorry attempt to intimidate Pauw and his publishers is that turning South Africa into a police state is just around the corner.

We have seen journalists such as Tiso Blackstar’s Peter Bruce and others spied upon and intimidated. The next step is jailing people like him, Pauw and their publishers. It used to happen under apartheid.

What Pauw published is no different to what Zwelakhe Sisulu published in The New Nation newspaper in the 1980s. The late, great City Press editor Percy Qoboza and others who were detained and harassed for exposing the corrupt apartheid security network must be spinning in their graves.

You have not heard a single bleat from the likes of the ANC Women’s League, the ANC Youth League or any other of the party’s heavyweights on this absolutely outrageous action by the SSA and SARS to gag Pauw.

The reason they are so silent is that they not only approve of it but would implement the same sort of action if they were in power.

The Zuma culture has spread to large chunks of the ANC, its leagues and indeed the state machinery. The man has not just stolen the party of Oliver Tambo. He has poisoned huge parts of its body.

The future could, therefore, be bleak. If Zuma’s preferred candidate, Nkosazana Dlamini-Zuma, wins the party presidential race next month, we should expect more of this shameful behaviour.

Many say this is too binary a view, that perhaps Dlamini-Zuma will be moderate and be different. This is the same arrant nonsense we heard about Zuma in 2006-2007. Look how that turned out.

Those who believe in our constitution, in its supremacy, have a fight ahead. Zuma, the wrecking ball, is at work, and he is not going to moderate. Neither will his preferred successor.