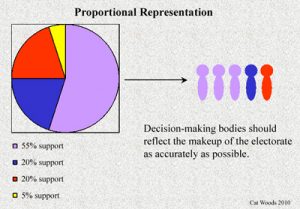 THE SA VOTING SYSTEM EXPLAINED: The Proportional Representation voting system that is used in SA means that every vote counts and that NONE ARE WASTED. This why it is important to vote for smaller parties and NOT the main parties like ANC or DA!

If 13 people go to vote the sum looks like this:

NOW the ANC still only gets 6 votes, but it is out of out of 13 votes which means they only get 46% of the seats, whereas previously those same 10 votes would have given them 60%!

The “other” “smaller” parties actually REDUCE the ANC majority and strengthen the opposition.

Vote for the party that shares your beliefs and principles?

NO VOTES ARE WASTED, not even those who did not get seats as they are counted in order to determine the % of seats a party will get.

Furthermore, even if your party is a small minority, the more seats they have, the more funding and resources they receive to further their aims and to grow.

VOTE FOR A SMALLER PARTY!