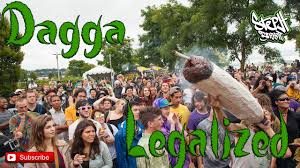 In a unanimous judgement, the Constitutional Court on Tuesday ordered that the private consumption and cultivation of cannabis be decriminalised.

As judgement was being handed down, the court was filled with cheers of “Ganga” from public gallery.

It has been a long journey for Gareth Prince, one of the applicants in the matter, who began his fight against the criminalisation of cannabis over two decades ago, arguing that it was inconsistent with his constitutional freedom of religion as a Rastafarian.

Deputy Chief Justice Raymond Zondo handed down the judgement, which confirmed that sections 4(b) and 5(b) of the Drugs and Drugs Trafficking read in part with section 22(A)(9)(a)(i) of the Medicines and Related Substances Control Act were constitutionally invalid.

These sections, the judgment reads, “criminalise the use or possession in private or cultivation in a private place of cannabis by an adult for his or her own personal consumption in private.”

The order does not extend to use and possession of cannabis by a child, or by an adult in public.

However, the court noted that right of privacy was not necessarily limited to a person’s home and its order went broader than the high court judgement, allowing adults to use cannabis in other private places.

In his judgment, Zondo said that it would at the discretion of the police officer to determine if an individual carrying cannabis outside of home was using it for personal and private consumption or for dealing.

If the person is suspected of dealing, Judge Zondo said the police officer may arrest the person. But ultimately, it would be up to the court to decide whether the person in possession of cannabis had the intent to deal it, or use it for his/her consumption.

Responding to the question on what the first thing he was going to do following the judgment, Prince said he would “retreat into his inner chambers and make the burning sacrifice”.

The “Dagga Couple”, Julian Stobbs and Myrtle Clarke, who joined the case, said their legal team would analyse the judgement and its definition of private use to determine where they stand. “It is certainly a momentous day.”

“We are looking forward to telling the police to leave us alone now,” said Clarke on the decriminalisation of private use.

What happens next?
Parliament will have to determine what quantity of cannabis may be used for private consumption or cultivation.

According to Zondo, the “court would infringe on the separation of powers” if it determines the amount itself.

Parliament will have to address the constitutional defects in the Drugs Act and Medecins Act in the next 24 months in the statutory provisions in this judgment.

If Parliament fails to do so within the period, the order that Zondo handed down on September 18 will become final.