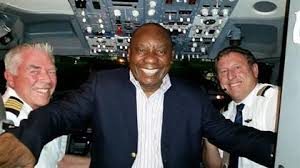 Cyril Ramaphosa is currently on a quest to get as many people on-board with the ANC as possible, ahead of next week’s general election. The president may have experienced a bit of turbulence during his first 14 months in charge, but he’s confident of making a smooth landing once the polls have been closed on Wednesday 8 May.

Addressing a gathering in Lynnwood, east of Pretoria, Ramaphosa was quizzed on a range of issues, including land expropriation and corruption. The two subject areas have come to define Cyril’s leadership, as he’s been given the unenviable task of trying to unite both the country and his own party.

Cyril Ramaphosa and the unity “balancing act”
In the last year or so, the president and his comrades seem to be on different flight paths. Just last night, Ramaphosa contradicted the claims of his beleaguered Secretary-General Ace Magashule, who said his phone had been hacked recently. Putting on a united front hasn’t been easy, especially as Ace has been accused of undermining Cyril.

Cyril Ramaphosa talks land grabs and taking flight
Speaking to the audience, Ramaphosa assured them that land grabs would be eradicated in South Africa: We’ve seen several attempts to occupy land in 2019, but the ANC leader says this is not helpful for the expropriation debate.

Cyril also vowed to “close the taps where there is corruption”. His metaphors certainly gave zest to a speech rooted in pragmatism, but his calls for South Africans to “hop on his plane” arguably topped the lot:

“We come from a cathartic past few years, we have [come] from the brink. Please join me in this journey – we are in an aeroplane that’s on the runway and it’s about to take off. The key question is will you be a passenger on this plane? Let’s fly this SA plane!” – Cyril Ramaphosa

“We’ve always been a party about land”
Cyril Ramaphosa will be hoping his flight isn’t delayed, should he secure a seat as president for the next five years. With David Mabuza and Ace Magashule in tow, he might have to keep one eye on his cabin crew while trying to guide this plane towards prosperity. But first, he’ll have to get clearance from the South African electorate.

He’s hoping that the all-important ticket will be getting things right with expropriation. Ramaphosa suggested that the ANC “has always fought for land” since their inception in 1912 and that the “gross injustice” must be corrected.