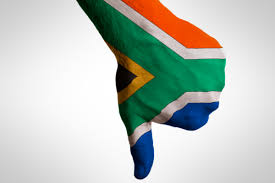 Report from Statistics South Africa has shown a negative trend in the tourism sector.

The South African attraction
South Africa is a beautiful and diverse country. It, therefore, comes as no surprise that it has been a popular tourist destination with global travellers since it rejoined the international stage in 1994.

So much so, in fact, that is has become a crucial sector of the economy and provides strong social and economic value to millions of locals in South Africa every year.

The net result of this is that facts and figures pertaining to the industry are keenly watched and the published findings from Stats SA do not make for optimistic reading.

Problems affecting the tourism industry in South Africa
Unfortunately, the country has its problems, both self-made and natural, and it seems the combination is starting to take its toll on the tourism sector.

Certain issues faced by the industry are unavoidable, such as the recent drought in the Western Cape, but more can and should be done about others, such as the crime rate.

While the beauty of South Africa has seen the tourism sector stubbornly grow year-on-year, it seems the tipping point where the country’s magic is enough to overlook its problems may have been reached.

Worrying decline
The STATS SA report shows the overall number of visitors to South Africa in the first financial quarter of the year, normally one of the most popular times to visit the country, fell by 3%.

The biggest decline was from the Middle East, which fell by a shocking 19.4%.

The most concerning dip, though, was that of the number of tourists from Europe, a traditional stronghold of South African tourism, which dropped by 8.5%.

The regions that boasted increases in visitors were Asia (up by just 0.8%), North America (up 1.4%), countries in east and central Africa (up 4%), while tourists from North Africa saw a massive boost of 13.6%.

The biggest concern however is that the numbers for Q1 2019 aren’t just worse than 12 months before, they are lower than 2017’s numbers.