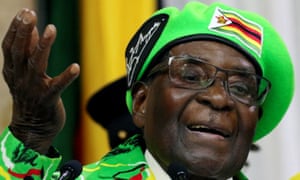 The head of the World Health Organization has said he has rescinded his decision to name Zimbabwe’s president, Robert Mugabe, as a goodwill ambassador after the move provoked global outrage.

Tedros Adhanom Ghebreyesus, the director general of the UN health agency, had this week asked Zimbabwe’s 93-year-old authoritarian leader to serve in the role to help tackle non-communicable diseases such as heart attacks, strokes and asthma across Africa.

The decision triggered confusion and anger among WHO member states and activists who noted that Zimbabwe’s health care system, like many of its public services, has collapsed under Mugabe’s regime.

Earlier in the day the UK government criticised the WHO’s decision as “surprising and disappointing”. A Downing Street spokesman said British diplomats had raised serious concerns with Tedros.

A UK government spokesman sai, the WHO decision was at odds with US and EU sanctions against Mugabe. “Although Mugabe will not have an executive role, his appointment risks overshadowing the work undertaken globally by the WHO on non-communicable diseases,” he said.

The US state department said: “This appointment clearly contradicts the United Nations ideals of respect for human rights and human dignity.”

Mugabe was in Uruguay for the announcement by Tedros, the former Ethiopian health minister who was elected as the WHO’s first director general from Africa this year after defeating the British candidate, David Nabarro, in three close rounds of voting.

Tedros said he was “honoured” to announce that Mugabe had agreed to serve as a goodwill ambassador on non-communicable diseases for Africa. He hailed Zimbabwe as “a country that places universal health coverage and health promotion at the centre of its policies to provide healthcare to all”.

The choice of Mugabe for the role has also angered opposition parties in Zimbabwe and human rights campaigners who accuse the leader of violent repression, election rigging and presiding over the country’s economic ruin.

The main opposition party in Zimbabwe, MDC, described the appointment as “laughable”. “The Zimbabwe health delivery system is in a shambolic state. It is an insult,” the spokesman Obert Gutu said.

“Mugabe trashed our health delivery system. He and his family go outside of the country for treatment in Singapore after he allowed our public hospitals to collapse.”

Zimbabwe’s state-run Herald newspaper reported the appointment under the headline “New feather in President’s cap”. It said Mugabe had told the WHO conference in Montevideo on Wednesday that Zimbabwe had developed a national policy on non-communicable diseases, and that he had called for more funds for developing nations.

According to the WHO, non-communicable diseases are by far the world’s leading cause of death, killing more than 36 million people a year.

UN agencies such as the WHO, UNHCR and Unesco all appoint goodwill ambassadors to highlight specific causes and often to draw publicity.

Unicef ambassadors include the singer Katy Perry and the tennis player Serena Williams.

By: Ruth McKee /The Guardian