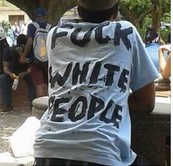 Terrible we know but nevertheless *True and Factual‼😳*

When they all get murdered or leave South Africa they will return to what they were before the whites arrived – poverty stricken, backward subsistence hunter/gatherers within 50 years.

• are the most industrious and innovative race the world has known.
• Whites have crossed seas,
• harnessed rivers,
• carved mountains,
• tamed deserts, and
• colonized the most barren icefields.

Whites were the first to
• circumnavigate the planet firstly by ship, and
• Then by aeroplanes
• After which they orbited it by spacecraft,
• they walked on the moon and
• explored the solar system,
• climbed the highest mountain peak,
• reached both poles,
• exceeded the sound barrier,
• descend to the deepest points of the oceans……

yet Blacks still can’t even feed themselves.
• No pre-contact sub-Saharan African society ever
• created a written language,
• or weaved cloth,
• forged any metals,
• invented the wheel,
• plowed a field for feeding their towns,
• devised a calendar,
• code of laws,
• any social organization,
• system of measurement,
• maths,
• built a multi-story structure,
• A sewer system,
• infrastructure of any kind.

They never
• drilled a well,
• irrigated a dry field,
• created any agriculture,
• built a road,
• No sea-worthy vessel.

They never
• domesticated animals,
• exploited underground natural resources,
• produced anything that could be considered a mechanical device.

• Blacks were still living in the Stone Age when Whites discovered them just 400 years ago.

• Blacks are the oldest race, so they should be the most advanced — but they never advanced at all.

Blacks are the only race incapable of even providing nutrition for themselves.

Whites still have to
• provide food,
• medical,
• financial, and
• engineering aid to every Black nation.

• Blacks can’t survive without White charity.
• Blacks became an out-of-control invasive species after Whites domesticated them and then later gave them their independence.
• No Black society has ever independently developed and maintained its own technological way of life.

• Some groups succeed all of the time, everywhere.
• Some have never succeeded, anywhere.

• Sub-Saharan Africans have never made a contribution to the world. There are no White Third-World nations only
• Black 3rd world countries.