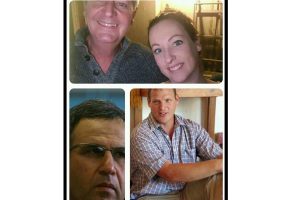 It was another bloody weekend. Three of our people were killed in farm attacks again. And while South Africa is reacting in righteous indignation, while the government is concerned about a bomb attack in Zimbabwe and the media, as usual, is quiet about it, the identity of the three victims reveal something which nobody can deny.

On a plot of land near Rustenburg, 46 year old Kallie Schoonraad is shot in front of his family

In his house near Broederstroom, 64 year old Peter Dawson is murdered brutally

In his office just outside of Stellenbosch, 62 year old Jeffrey Zettler is stabbed to death with a knife.

Under normal circumstances these three men’s names would never have been linked. They don’t seem to have a lot in common, apart from two undeniable facts: They were white and they were murder victims.

The bloody weekend of 23/24 June 2018 proved, once again, that we are not dealing here with crime that is out of control. We are dealing with a very familiar political situation in post Colonialist Africa. The carefully executed massacre of the white minority population.

Whether young, middle class Afrikaans speaking, whether elderly English speaking or wealthy Jewish farmer – there is no distinction. As was the case in the Bush War in Rhodesia and the massacres in Angola, Kenya and the Congo, having a white skin makes a man a target.

We knew this as far back as 1990 when the Conservative Party warned against what was going to happen. Why, after all, would it be any different here than anywhere else in Africa? And with this in mind, almost 600 000 people voted in 1994 for the only sensible, in fact: only common sense, solution to what was inevitable. Self determination which would give us the constitutional and international right to protect our borders and our citizens.

To this day not a single attempt was made in parliament by the people entrusted with this mandate to get the process going. And we have been paying for this error of judgement with the blood of our people.

Some people argue that an armed reaction to the situation is a solution. It is not. These people do not take into account the fact that an unarmed minority would face, not only all the defence mechanisms of this state, but also of the bordering countries and the wrath of the world. It will simply lead to a seemingly endless, drawn out civil war which will rage in our streets and backyards and living rooms, shops and schools and churches and farms for decades to come.

Why would we still fall around and lament the question: “Why doesn’t anybody do anything?” when we know by now that the solution is in fact in our own power? The government is not going to act. They don’t even bother to respond.

No current Parliamentary party is going to do anything. The DA depends too much on its alliance with the EFF. As official opposition, they have up to date not proposed a single solution to this dreadful massacre in Parliament, apart from condemning it from time to time. Cope is not going to do anything about it. Mosiua Lekota openly stated that he does not favour self determination, apart from the fact that he was the Minister of Defence who abolished the commando system thereby leaving our farmers unprotected.

Unless we admit and understand that the creation of a state of self determination is the only solution to address the killing of our people and support all attempts to achieve that, we will be sitting ducks.

Forget about the “It will never happen,” “We don’t have a leader”, “We can’t stand together” nonsense which we try to fall back on constantly as an excuse. We have to face the fact that lame excuses cost lives. As little as Jeff, Peter and Kallie would have been mentioned in one breath on Wednesday last, as much did their murder bring their names together this morning.

Should this not be a serious wake up call to us all. If the spilling of their blood calls us to unite and cast our vote for self-determination, then we would be traitors to their sacrifice if we don’t.