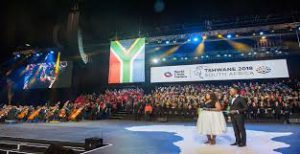 A South African choir, consisting of members of all racial groups, ended their performance at an international choir competition in Pretoria by singing an old struggle song calling for the killing of white people and the seizure of land.

The DA Mayor of Pretoria, in a resulting debate on Facebook, indicated that he sees nothing wrong with it and that people are overreacting.

The song calls for the killing of farmers and the taking of their land and was sung at the finale of the 10th World Choir Competition. According to reports the song was included in the repertoire at the last moment, and despite the objections of some choir members, they simply had to sing it. The song was indicated as a traditional Zulu War Song.

The song, Thina Sizwe, is one of the song regularly sung by both Jacob Zuma and Julius Malema at political rallies of the ANC and the EFF. Freely translated it means:

Thin’ abantu boMkhonto sizimisele (We the people of Mkhonto are prepared)
Ukuwabulala wona amaBhunu (To kill the Boers)
Hamba kahle Mkhonto Mkhonto (Go well Mkhonto/spear)
Mkhonto weSizwe (Spear of the Nation)”
“Thina sizwe esimnyama (We the black the nation)
Sikhalelela izwe lethu (Are we weeping for our land)
Elathathwa ngabamhlophe (Which was taken away from us by white people)
Mabayeke umhlaba wethu (Let them return our land).”