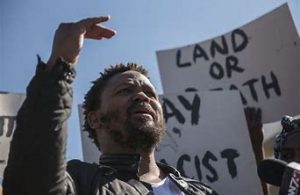 This comes more than a year after Mngxitama threatened and incited his followers to kill white women and children, the NPA still cannot give a clue as to whether he will be prosecuted for this.

TAU SA lodged a complaint of hate speech against Mngxitama on December 11, 2018, with the police. Since then, TAU SA has repeatedly asked about the progress of the case, and thousands of people have also added their names to TAU SA’s petition on this.

“From the most recent letter to the NPA in November, it is clear that there is still no clue as to what is going on with the case, or even who is handling it,” says Mr Louis Meintjes, the president of TAU SA. “In terms of the National Prosecuting Authority Act, the power to institute and take legal action on behalf of the state lies with the National Prosecuting Authority. The state must protect South Africans from crime but fail again and again. This is highly worrying and creates the idea that law violators can do what they want without any consequences.

“The approach of the NPA is a shameful disgrace and shows the NPA’s disrespect for complainants. The least that the Prosecuting Authority can do is answer complainants’ inquiries properly, but even that doesn’t happen.”