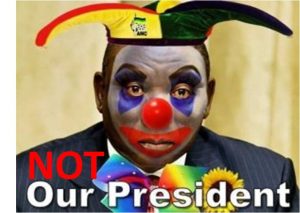 The SONA speech reflected the truth of the matter – Ramaphosa, the EFF and Bantu have squandered their chance. After a quarter of a century, Bantu are still living in the past, constantly rewriting it, as they take the country even further backwards. Now let’s look at the reality and what the ANC and Mandela’s #TheAfricanWay has brought us…

The first impression is of a circus, where red clad laughing clowns were joyfully playing and holding up the rest of the circus from getting underway. Secondly, there was a distinct feel of a Matric Dance or Prom to the whole affair, with some very infantile overdressed children with too much money to spend, roleplaying, trying to impress themselves each other. Only, most of them never even made Matric! There was certainly no feeling at all of a solemn reflection of a deeply bankrupt country in crisis.

These people just don’t care about all the different crisis situations we face. That is why Ramaphosa was strong on the code speak and narrative creating again. He again, like every year, went to fetch the story 30 years ago with Nelson Mandela’s release. Is SONA going to be a revisionist history lecture every year? Are we not going to talk about the situation right now, never mind the real history?

Truth is, objectively spoken, the release of Nelson Mandela heralded in:

#TheAfricanWay, an afrocentic, black fascist reality and the incompetent scavenger like looting by the State of anything that is solvent.

Mandela heralded in a country with no apparent values, where people just throw rubbish next to a public rubbish bin.

Mandela heralded in the tyranny of the majority, where the majority’s votes keep the criminals in power and create new criminal parties like the EFF.

Mandela heralded in the total onslaught on the minorities of the country and their value system and history.

Mandela’s release heralded in the total collapse of each and every State institution like Eskom that once could be compared to the best in the world.

Yes, it was Mandela that heralded all this in because the writers of the Constitution thought he was a god and wrote the Constitution in such a way as to give one man all power. Power which landed up with someone like Zuma and his tsotsis. Tsotsis who are still there by the way.

Don’t we talk about this? Today after the circus themed Matric Ball, reality will settle back in:

The reality of bankrupt and imploding State departments, institutions and municipalities.

There reality of the report last week that only 18 municipalities in the country are not totally dysfunctional.

Today the reality starts again of people being robbed, raped and killed by criminals.

The reality of water and power cuts.

The reality of failing sewage systems which causes a massive stink where people have to live and sewage to stream into rivers.

The reality of crappy services at hospitals and some very unfriendly and uncaring black nurses sitting around when patients need care.

Ramaphosa and liberal enablers in the media, must drop the false narrative and talk about how South Africa has been turned into a filthy trash heap with no apparent value systems. Talk about how the ANC brought in state capture as a policy tool and how the country is being looted bare in front of our eyes. Talk about how we are already a captured and thus a failed State.