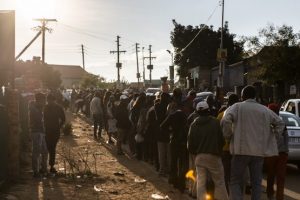 The publication of the most recent Quarterly Labour Force Survey by Statistics SA and its calculations that the number of unemployed people continues to increase have once again elicited strong opinions and calls that somebody must do something.

Reading the labour force and unemployment statistics together with the report on population growth that Stats SA published a few days earlier – and the statement of the SA Reserve Bank on interest rates a week earlier – creates an even gloomier picture.

Read: The South African disaster: No businesses for the unemployed
The labour force survey for the second quarter of 2019 shows that the economy added a paltry 25 000 jobs compared to a year ago, but that the labour force increased by 598 000 work seekers.

This means only a single job was available for every 24 people who entered the labour market during the last year.

The figures are even worse when taking a closer look at the different categories of employment as measured by Stats SA. Formal, non-agricultural employment continued to decrease rapidly and posted a loss of 148 000 jobs compared to a year ago.

The agricultural sector shed 1 000 jobs, according to Stats SA, and even private households cut back on employment – by 45 000 people compared to a year ago.

The only category to show an increase in employment was the informal sector, apparently adding 219 000 jobs. One can only speculate what these ‘jobs’ are, but it seems safe to say that informal employment is a case of necessity rather than choice and that nobody aspires to selling clothes hangers at traffic lights.

Digging out Stats SA’s 2014 labour force survey shows than we are losing the battle against unemployment and, by indication, the war against poverty and inequality.

The number of unemployed people has increased in the five years since the 2014 survey by some 1.6 million people due to an increase of nearly three million in both the population and the labour force. The economy could only absorb 1.3 million of these new work seekers.

The Stats SA figures show that some 800 000 workers entered the informal rather than the formal economy.

In just the past year, the number of unemployed persons in SA increased by 573 000 to nearly 6.66 million. The total increases to 9.4 million when adding the discouraged work seekers.

Stats SA’s definition of a discouraged work seeker is a person who was not employed during the reference period of the survey and who wanted work, but did not take active steps to find work in four weeks prior to the survey. Reasons for becoming discouraged in not finding work include a lack of available jobs, unable to find work that matches the work seeker’s skills level, and losing hope in finding any kind of work.

The low growth in new employment opportunities is the result of low economic growth over the past year and little indication of better prospects over the short to medium term.

Reserve Bank Governor Lesetja Kganyago said in a statement after the July meeting of the Monetary Policy Committee that prospects for the economy remain a concern.

“Gross domestic product contracted by 3.2% in the first quarter, reflecting weakness in most sectors of the economy. The sharp quarterly decline was primarily caused by electricity shortages and strikes that fed into broader weakness in investment, household consumption and employment growth,” said Kganyago.

“The SA Reserve Bank’s composite leading business cycle indicator continues to trend lower,” says Kganyago. The bank now expects GDP growth of only 0.6% for 2019 compared to its previous forecast of 1% a couple of months ago, based on an important assumption that there are no significant unforeseen disruptions.

The future looks even more challenging when we read the latest report on changes in the population after looking at the Reserve Bank’s forecasts and the shocking figures in the labour market.

Stats SA’s latest research estimates that SA’s total population increased by around 1.4% during the past year to nearly 58.8 million people at the end of June 2019.

Given the 0.6% growth in GDP – basically the annual increase in the amount of stuff we produce – the result is that, on average, every person in SA has less in terms of goods and services than they had a year ago.

The increase in the population is due to reduced infant mortality and an overall increase in life expectancy, from 69 years in 2004 to nearly 73 years for babies born in 2019. It is also significant that immigration from the rest of Africa contributed significantly to the increase in SA’s population numbers.

Stats SA estimates show that SA received a net inflow of nearly 3.6 million people between 1985 and the middle to 2016, with Stats SA estimating that another million will migrate to SA between 2016 and 2021.

The bulk of the immigrants are from African countries. Stats SA estimates that by 2021 more than 4 million migrants from Africa will arrive in SA. The figures also indicate that the rate of migration from the rest of Africa is increasing.

In contrast, figures show that the emigration of white South Africans is increasing. It is likely that between 1985 and 2021 more than 636 000 whites – in excess of 10% of the white population – will have left SA.

Stats SA says that current data on emigration levels is limited, but it uses a wide range of sources and research documents. The figures are probably more accurate than formal immigration and emigration statistics as a lot of people do not necessarily do all the paperwork before arriving in or leaving the country.

The net result of migration and population growth is that SA’s population increased by 8.8% in the five years since 2014, from 54 million to the current nearly 59 million. Unfortunately, the economy grew much slower.

Reserve Bank figures show that real GDP increased by only 4.3% over the same period. The end result is that real GDP per capita decreased by 4.1% over the last year. In simple terms, every person in SA is, on average, 4.1% poorer than five years ago