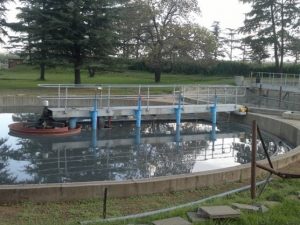 Water shortages have become a very real reality for the residents of the neighbouring towns of Sundra, Rietkol and Eloff in Mpumalanga. The towns have been experiencing regular periods in which the water just stops flowing, for a year now. Local resident, Derek Bester, says water supply is unequal and sporadic with lower lying parts left without water for hours per day, and higher parts left without water for weeks at a time.

Residents are surviving using various means like sharing water from drill holes, getting water from farmers in the area and collecting water from their roofs. Those who don’t have any means of getting water on their own have to go to collective water tanks irregularly filled by the local ANC controlled municipality. The neighbourhood watch is delivering water to people without transport like old people in the towns. Afriforum is distributing 5 L cans containing drinking water at no cost.

Amanda Brandow of Sundra says that she can’t even wash her husband’s clothes. He is working with oil and grease and he has to go to work the next morning without bathing. She says her children must share a bucket of water to bath. Stephenie du Plessis of Eloff says that her family has to wait for rain to bath properly. She says they mostly bath with a cup of water and a washing towel. Dominee Johannes Rossouw of the local NG Church in Sundra  says he does not know what would have become of the town if it was not for local farmers taking water to schools and churches.

The local ANC mayor told Rapport newspaper the problem is a pipe system that is leaking due to it being old. He says there is no money to replace the pipes. They worked on the pipes in December according to him  but have to wait another 7 days before they can pump water.

The VF+ leader in the area, Pieter Senekal, says the problem is actually Rand Water that lowered the water pressure to the area to 40% due to the fact that the  local municipality owes Rand Water an amount of R120 Million in unpaid bills. The usual story. Lowered pressure in the pipes would definitely account for higher lying areas experiencing more water shedding than lower lying areas. There is no relief for these towns in sight. #TheAfricanWay