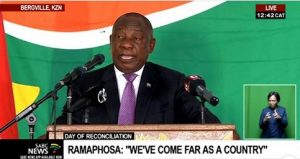 Monday on the 16th December, 2019 in Bergville , KwaZulu Natal, Ramaphosa gave a speech. Included in this speech was the controversial and acutely serious issue of; Land Expropriation Without Compensation. He said that True Reconciliation cannot take place without Taking the Land, the Land SHALL be returned.

The attached video is of the FULL speech, use the slider to reach around 6:56 into the video to listen to the beginning of the important part of the speech.

Ramaphosa has a strange way of expressing so-called “Nation building” and overcoming as he puts it “a bitter past” with his announcement of “Land Expropriation Without Compensation” is no way to build a nation or did he not learn anything from all that went on in ZIMBABWE? Land Reform as Mugabe referred to it did not work out well for Zimbabwe.

Buckle up folks the ride is going to get very bumpy and there will be consequences. BE PREPARED – BE VIGILANT AND ACTION IS ANTIDOTE TO DESPAIR