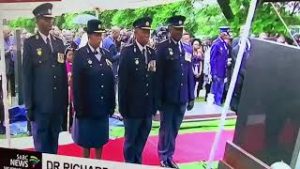 Late businessman, Richard Maponya, who owned a string of businesses in Soweto, including the famous Maponya Mall in Pimville, was laid to rest at West Park Cemetery in Johannesburg on Tuesday, January 14, 2020.

Maponya’s funeral service was held at the University of Johannesburg Soweto Campus on Tuesday morning. Ramaphosa declared the funeral a Special Official Funeral, category 2 – which meant that all state flags had to be flown at half-mast until the evening of the burial.

In full recognition that this was a funeral, so we respect the family. But if the top brass of the SAPS can’t even march -it looked like a circus!