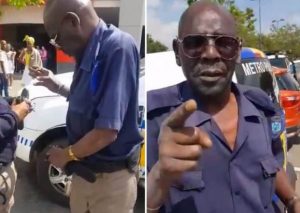 WATCH this video of a metro cop allegedly under the influence of alcohol. He nearly crashed into a biker in Benoni and threatened to shoot the man while he was recording him.

The City of Ekurhuleni responded that the “incident has been brought to the attention of the EMPD, who will immediately attend to the matter.”

Bystanders demanded that the officer be tested.

In the video clip, the officer is being led away while the person. Recording says, “Your gun is falling of, please take that firearm away before we all get shot by accident.”

He then adds that there’s alcohol in the vehicle as well, while another person can be heard saying that officers threatened bystanders.

In the second clip, another bystander questioned why the officer was being escorted from the scène without being tested or arrested.  The officer then confronts bystanders, asking if “they tested him.”