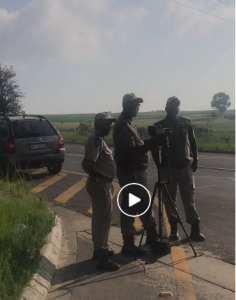 A video of traffic officers in confrontation with a driver who was travelling from Ermelo to Nelspruit on Thursday is trending on social media.

According to Lindelani Shezi’s post on Facebook, he was stopped and asked for his license and was then informed he was over speeding by traffic officers.

He alleges that they tried to get a bribe from him. However, details of the alleged bribe were not captured on the video Shezi posted.

“ The officers fined me R1500 and I agreed but I was asked if I was willing to pay the fine or if I had on me. I asked to be shown my speed record but they failed to do so. I opted to record the conversation which was followed by threats with one of the officers refusing to give back my license.”

Meanwhile, MEC for Community Safety, Security and Liaison, Pat Ngomane has confirmed in a statement that an investigation is underway. “ I have seen the video and have assembled an investigating team to look into the matter. This is a matter of urgency as these are serious allegations,” said Ngomane.

The traffic officers could not be reached for comment.

By: mpumalanganews.co.za
This report does not necessarily reflects the opinion of SA-news.