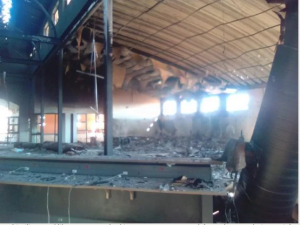 A multi-million rand library was torched in Letsopa near Ottosdal, North West, during a violent protest.

North West Arts, Culture, Sports and Recreation MEC Virginia Tlhapi has condemned the destruction of a multi-million rand library in Letsopa near Ottosdal during violent protests that erupted on Monday.

The Letsopa community library was a state-of-the-art library that included a toy library for kids and a library for the blind estimated at R12 million.

The was completed and handed over to the municipality in 2014.

“Preventing learners from their right to an education, workers from going to work and malicious destruction to infrastructure cannot be tolerated,” Tlhapi said.

“It is sad when poor communities like those of Letsopa destroy property built to change their lives, especially for their kids who use these libraries to improve their performance at school and create jobs for the local people.

“We (are) comforted by the news that the police have arrested the suspects and they should be prosecuted and if found guilty they should be locked up for the long time. Communities must never tolerate this kind of barbarism,” she said.

Two municipal trucks, a tractor and a building were torched during the violent protests on Wednesday.

North West police said 14 people had been arrested for public violence and arson.

Captain Sam Tselanyane said nine were arrested on Wednesday, they appeared in the Ottosdal Periodical Court on Thursday. Their case was postponed to 16 July 16 and they remained in custody.

Five others were arrested on Thursday in Letsopa, Ottosdal, after they allegedly set alight Letsopa community library and petrol bombed a police Nyala (armoured vehicle).

“They are expected to appear before the Coligny Magistrate’s Court on Monday, 15 July facing charges of public violence and arson,” he said.

African News Agency (ANA) / 2019-07-12
This report does not necessarily reflects the opinion of SA-news.