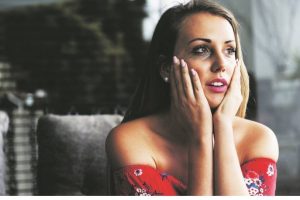 Four Metro Police officers, 2 of them women, beat, kicked and hit Kymie du Toit’s head against a concrete floor whilst dragging this young lady who works as a creche teacher from her car at a petrol station in Moreleta Park, Pretoria on Tuesday around 23:30.

The marks were still visible on her face and arms Wednesday whilst speaking to Rapport and her knee was also injured.

And her crime? That is difficult to figure out because she came from an estate near Lyttleton where she did house sitting to look after young children and was just on her way home. What could have possibly made a young white female suspicious to these Metro Police officers is impossible to know.

When Kymie left the Cornwall Hill estate, where she did the house sitting, she received an sms from the mother of the children thanking her, phone records show the time was then 2312. Kymie was robbed in February by 4 men who pretended to be Police officers, so when a Metro Police bus tried to pull her off the road just after she left the Cornwall Hill estate , she decided to do what she was advised to do by SAPS under such circumstances.

She put on her hazards and drove slowly to a place where she felt safe. She pulled over at a garage in Moreleta Park . It was only 13 minutes from the time she left the Cornwall Hill estate until the time she stopped at the garage because CCTV footage has a time stamp. She never traveled more than 53 km/hour and her vehicle’s tracker reports proves that.

After Kymie was assaulted and cuffed, an ordeal of 3 and a half hours followed in which she was driven up and down and also told her life will end that night. The law states that any person arrested must be taken to the nearest Police station immediately but the Metro Police first drove around with her for about an hour, trying to pull off other vehicles, after dropping Kymie’s car at her mother’s house. Kymie was cuffed the entire time. They eventually took her to a dark area in Centurion after driving around where other Metro Police cars were parked. They then did a breath alcohol test with a breathalyzer which was clearly a used one. The breathalyzer showed she had 0% alcohol in her breath.