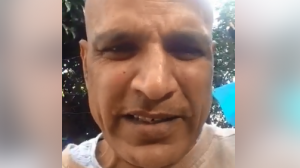 Durban – Kessie Nair the Durban man who called President Cyril Ramaphosa the derogatory K-word in a Facebook video – that has gone viral – has been arrested by members of the Hawks.

Simphiwe Mhlongo, spokesperson for the Directorate of Priority Crimes Investigation (Hawks) confirmed that police officers swooped on Nair at his home in Phoenix on on Wednesday night.

A case of crimen injuria has been laid against the ex-convict, Nair, who posted the video on Facebook.

In the almost five-minute long video, Nair demands that Ramaphosa is charged for failing the nation.

Nair said he was prepared to go to jail for his comments.

The case was opened at the Bayview Police Station by community activist and former eThekwini councillor Brandon Pillay.

Pillay will also be lodging a complaint with the South African Human Rights Commission. Nair was jailed for six years in 2005 for fraud amounting to R17 500.

Nair is expected to appear in the Durban Magistrate’s Court soon.

Watch the uncensored video below:-