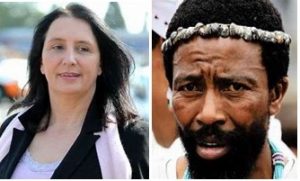 Real estate agent Vicki Momberg was sentenced to an effective two-year imprisonment for racist remarks to police and emergency services when she sought help after she was the victim of theft in North Riding in February 2016. The incident is on camera trapped.

Although the authenticity of Momberg’s words is undeniable, her sentence is surprising. A first offender convicted of crimen injuria will usually be sentenced to a fine and suspended jail on condition that the offender does not re-offend

The King does, but Momberg doesn’t?

Criminal Law Attorney Ulrich Roux was not impressed by Ramaphosa’s Christmas gift to many prisoners. Ramaphosa announced on Monday during Reconciliation Day in Bergville, KwaZulu-Natal, that the punishment of certain categories of sentenced offenders will be reduced.

According to Chrispin Phiri, DKD spokesperson Momberg is also not “eligible” to participate in the DKD’s rehabilitation programs in prison. He stated that escaped or fugitive offenders” who evade the justice system after being released on bail pending an appeal “, or those still on parole on December 16, 2019, do not qualify.

“The Minister of Correctional Services has already confirmed that #FeesMustFall activist Kanya Cekeshe is eligible, as well as AbaThembu King Buyelekhaya Dalindyebo.

It doesn’t make sense because both are in prison for violent crimes. The king was sentenced to 15 years in prison for seven abductions, three assaults, three arrests and culpable homicide. The Court of Appeal reduced the sentence by three years.

According to News24, Cekeshe was convicted of burning a police vehicle during a violent march. How can the two criminals qualify, but no one convicted of crimen injuria? ”Asks Roux.

Meanwhile, Vicki Momberg is likely to spend Christmas in prison, as she has shot herself in the footsteps of the Department of Correctional Services (DCS) regarding the possible presidential reduction of her sentence.

Momberg is serving a two-year prison sentence in Johannesburg prison for crimen injuria after police searched her for three months. She surrendered herself to police on November 6.

Momberg strongly denies that she fled. She maintains she was unlawfully arrested on November 6 pending her petition to the Court of Appeal against her sentence.

Her attorney, Anesh Sukdeo, said Tuesday that Momberg’s petition to the appeals court had succeeded and that they were just waiting for a written confirmation and a court date.

She also recently filed a review application with the Randburg Magistrate’s Court to set aside the warrant for her arrest.

She already wanted to bring the review application on the day of her arrest (November 6), but the Randburg regional magistrate said her court does not have jurisdiction to hear the case.

Before DCD’s response to Netwerk24’s inquiry, Sukdeo had already said Momberg would continue with her review application whether her sentence was reduced or not, “because she wants to show the people she is in prison because of the defective justice system”.

Sukdeo did not immediately respond to the second enquiry about the DCS response – that Momberg did not qualify and was not eager to participate in prison programs -. It will be updated as soon as it is received.

Sukdeo also says there is no warrant under which Momberg was arrested.

He said her R2 000 bail was still valid – “it was not cancelled or forfeited by the state”.