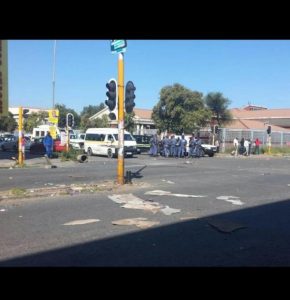 Taxis operators affiliated to the South African National Taxi Council (Santaco) began their planned seven-day strike on Tuesday night. They are demanding answers from the provincial government over the completion of a taxi rank and mushrooming potholes on all their routes. 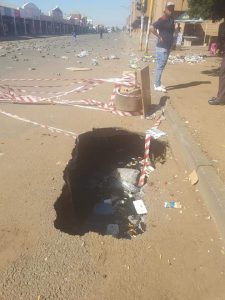 Vereeniging CBD is under siege and all businesses in the city center are closed. This happens on the eve of humans rights commemoration in Sharpeville. Where is the Gauteng Department of Transport to Ameliorate This Taxi Rank Conundrum? 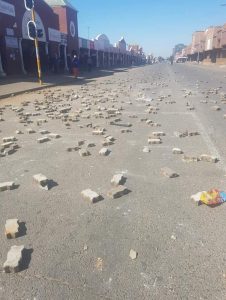 More than 50 taxi operators were arrested on Wednesday for blockading roads and allegedly pelting vehicles with stones around the Vaal Triangle.

Gauteng police spokesperson Captain Mavela Masondo said the group was arrested in Vereeniging after its members refused to disperse from the roads they had barricaded.

Masondo said the taxi operators became violent when police ordered them to vacate the roads and allow traffic to flow.

“We have arrested more than 50 people who refused to obey our instructions when we ordered them to vacate the roads. Protesters also refused to remove objects they had used to barricade roads when ordered to do so. Instead, they became violent and threw stones at passing motor vehicles and we had to act,” said Masondo.

The arrested group will face charges of public violence in court soon.

Masondo promised that various police units sent to the Vaal would continue monitoring the area until calm was restored.

Santaco spokesperson in Sedibeng, Mbuyiseni Mahlangu, said the events which were expected to take place in Sharpeville on Thursday would only go ahead if Gauteng Premier David Makhura attended to their grievances.

President Cyril Ramaphosa is expected to be the main speaker at the annual commemoration of the killing of 69 people on March 21, 1960, when 180 people were also injured.

Police spokesperson Captain Fikile Funda said they were shocked when they woke up to find that various objects, including trucks, were used to blockade all entrances and exits around the Vaal.