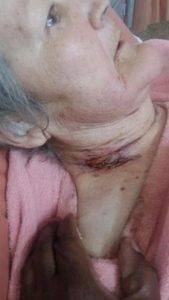 Elderly Anna-Marie Buys has tragically died in the Helen Joseph hospital in Auckland Park, JHB, on Thursday morning, 19 December, after she sustained serious injuries to her neck, when a black female patient had sat on top of her and started to cut her neck with a plastic knife, on Saturday 14 December. The motive is still unclear.

The husband of Anna-Marie was never informed of the incident and he had to find out for himself. The nursing staff also told the family that a doctor would only be available to look at the injury on 17 December because of the long weekend. Anna-Marie, who was in her late seventies and suffered from lung and brain cancer, sustained serious neck injuries on Saturday around 01:45 when a black female patient climbed on top of her and started to saw her neck with a plastic knife. The incident was also witnessed by another  fellow patient.

Anna-Marie was paralyzed in the left side of her body due to a stroke she suffered, so could not defend herself. Anna-Marie’s husband went to visit her in the hospital on Saturday and saw a piece of gauze on her neck. The gauze later came off and then her husband saw the deep wounds. He immediately called his daughter, Debbie and her husband to come to the hospital. The hospital told them that Anna-Marie was injured when a fellow patient wanted to pray for her. However another patient said that she saw how a fellow patient went to sit on top of Anna-Marie, held her mouth closed with her hand and started to cut her neck with a plastic knife. Anna-Marie’s own precise words were “A woman sat on top of me and wanted to kill me”.

The Buys family is very unhappy because the hospital never informed them about the incident. The woman who tried to kill Anna-Marie was also kept in the same room as Anna-Marie for at least another 2 days AFTER the incident and poor Anna-Marie must have been very scared during this time.

The family succeeded in holding a meeting with the hospital head on Tuesday and it was agreed that the hospital would lay charges with the Police but no case number was received as of Wednesday morning. This would now have tobe a murder charge. The family did not have the funds for a private hospital.