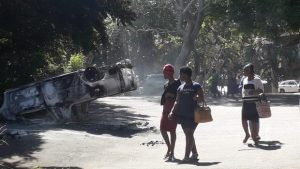 All classes at the University of Natal were suspended until further notice the many protest actions of students.

A vehicle was set on fire during the protest and peaceful lecturers and learners felt unsafe on campus.

Academic activities have been characterized by ongoing violence, protests and property damage in recent years.

On Monday, Wits University was in chaos when a lot of students disrupted classes, and it is expected to move further to other universities in the country.

Police said no arrests had been made following violent protests at University of KwaZulu-Natal (UKZN) campuses on Monday in which two vehicles and a guard house were set alight by students.

South African Police Service (SAPS) spokesperson in KwaZulu-Natal, Colonel Thembeka Mbele, told African News Agency (ANA) that to her knowledge, no arrests had been made.

Students at universities in the province have called for a total shutdown of institutions from Monday, the official start of the academic year, over National Student Financial Aid Scheme (NSFAS) payments and slow registrations.

Protests at UKZN’s Westville campus and Howard College campus turned violent, with vehicles being burnt at both institutions.

Mbele told ANA that the protests at Westville campus started at 8am with students “demanding to be registered”.

“They set the university vehicle and a guard room alight. A police vehicle was pelted with stones and damaged. A case of public violence was opened at the Westville Police Station for investigation. Public Order Police and Westville police are in the area, monitoring the situation,” said Mbele.

UKZN issued a statement on Monday saying that it had suspended lectures at all of its campuses until further notice.

When ANA visited the Howard College campus in the late afternoon, a burnt-out car was still within the grounds. Campus security said things had calmed down considerably. A strong police presence was still visible at the university.