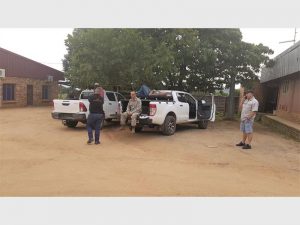 Pieter and his wife Tessa were attacked in their farmhouse near Sabaan Holiday Resort on Friday night. It was the second attack they survived this year. The other occurred in February.

It is believed that some of the suspects may have been involved in the previous incident. On Friday Tessa was already asleep and Pieter had just switched off the television in their bedroom. As he turned around to activate the alarm, he was confronted by an armed man.

The intruder fired a shot at him. It missed him and hit the wall behind the bed. Pieter was then hit on his arms, back and legs with a crowbar. “I became very calm and decided to rather do what they asked,” he said.

Several stolen items were found in the suspects’ possession.

Both Pieter and Tessa were tied up tightly with steel wire. He was ordered to lie down and beaten every time he tried to look what they were doing. “One of the men made suggestive remarks to Tessa and I was terrified for her sake,” he said. “She screamed and begged for mercy throughout the ordeal and fortunately they did not harm her further.”

The suspects emptied the house of electronics and even came back to the couple’s room for a second time. “When they finally left, I heard shots fired outside too. Perhaps they shot at a dog,” Pieter said.

He managed to break the wire around his wrists and once free they walked to Bambuu Lakeside Lodge for help. Clinton Eybers from the resort alerted security companies and the SAPS. A search for the suspects by Hi-Tech White River, Protrack Anti-poaching Unit and Bossies Community Justice commenced.

The vehicle was fitted with a tracking device, but it was apparently compromised. Members of the Protrack Anti-poaching Unit recovered the vehicle in a plantation in the Mariti area near Bushbuckridge on Saturday morning.

According to Danie Theron of Bossies Community Justice, information was followed up on and on Saturday evening the SAPS was contacted. Several police units joined in an operation and just before midnight two suspects were arrested in the area where the vehicle was found.

Stolen items were found in one’s possession and more in the possession of the second. A firearm was also found with him. Items that were reported after a previous burglary on the couple’s premises were also found. More arrests are expected soon.

On Monday Pieter complimented the forces, as well as the community of Hazyview for the way in which they stood together and helped.

The Els’ vehicle was discovered in a plantation near Mariti.

“Apart from being stiff and sore, I am thankful that we are alive,” he said. “But after a second incident in less than a month and a half we don’t feel safe any longer. Although she is a very strong woman mentally, Tessa is taking this badly. She is not in good shape emotionally,” he concluded.

• In a separate house robbery a man was stabbed at Jock of the Bushveld Chalets on the R40 outside Barberton on Friday night.

According to Reinhard Deysel of Hi-Tech Security in Barberton, at approximately 23:50 Louis and Thea Rautenbach were attacked on the property by unknown suspects.

“The information we have is that their son was outside just before midnight. When he got inside the house Louis and Thea were being robbed, then the suspects stabbed him above his nose. Fortunately the knife did not penetrate his nose bridge,” said Deysel.

The suspects fired shots during the attack, but no one was injured. Several items including a PlayStation, cellphone and laptop were taken.

They fled on foot through a fence that had earlier been cut, one which separated their property from Hannes Boshoff’s farm.

Spokesman for the local police, Capt Jabu Ndubane said SAPS launched a manhunt. “We are currently looking for the suspects and a case of housebreaking is being investigated.”