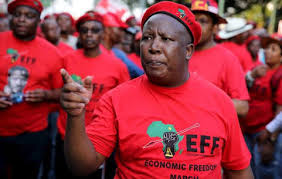 Malema told hundreds of EFF supporters who attended the party’s rally on Wednesday, a day prior to the voting on a no-confidence against Trollip which was postponed to a future date.

Malema said it was the party’s decision to call for Trollip’s removal and this will happen even if he defeats motions against him.

Malema gave the example of former president Jacob Zuma who resigned from his position early this year after he was requested by his party’s National Executive Committee (NEC).

“We told you Zuma will go and he is now gone. He faced nine motions of no confidence which he defeated, but look at him; he is history. That is what will happen,” Malema said.

He said they will keep tabling motions against Trollip and his administration until he is history.

“Once the EFF has pronounced on you, you won’t survive. You are gone. I can tell you he won’t finish the term.”

Malema said his party will make life difficult for Trollip by not supporting anything that he wants to do.