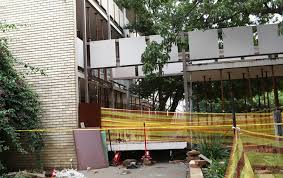 The FF Plus learned with shock, but without surprise, that infrastructure inspections at the Hoërskool Driehoek  were done only on 8 April 2006, 20 September 2006 and 8 April 2014.

In response to a FF Plus question in parliament, the minister of basic education acknowledged that the last investigation was conducted in July 2018 as part of an investigation to determine the school size capacity.

“It is clear that inspections are done sporadically and not at sensible intervals,” said Adv Anton Alberts, FF Plus premier candidate for Gauteng and party chairman.

“Even more shocking is that the last infrastructure inspection was merely part of Panyaza Lesufi, Gauteng Education MEC ,’s politically motivated initiatives to destroy Afrikaans schools by failing to take in non-Afrikaans-speaking schools. .

“It is also clear that the so-called infrastructure inspection that coincided with the school size inspection was only aimed at measuring classroom sizes and not the structural integrity of the school.

“It is therefore clear that the politics of Lesufi and his department led to the poor maintenance of Hoërskool Driehoek. The first group of inspections was long gone and sporadic and the focus of the last inspection was simply driven by political objectives and not to ensure the safety of the school infrastructure, ”says Alberts.

The FF Plus is currently investigating the possibility of laying criminal charges against Lesufi and his department. It is a pity that ordinary people and learners had to suffer because of the ANC who did not rule for all and target minorities for their own failures.

VF Plus
This report does not necessarily reflect the opinion of SA news.