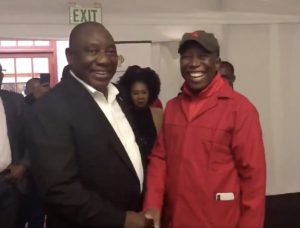 Racist Malema has once again earned his paycheck from the globalist Liberal World Order by inciting hatred against whites. In turn, Liberal mainstream Media earn their salaries (globalist advertising), by ignoring it. It is a tried and tested recipe to get an entire continent to give up their own countries, cultures, languages, traditions and resources, by creating a common enemy, that is so despised, vilified day after day, that you want to destroy it, more than you want to keep your own heritage and identity. Like many forms of extremism, racist “anti-racism” gets votes… and genocide.

President Trump talks about the fake news media when he refers to big liberal corporate news outlets like CNN, NBC, ABC and others and he is right. He is right because they deliberately push a globalist liberal narrative, and rewarded with globalist advertising and even donations from multinational and globalist corporations, organisations, oligarchs and left wing political parties. By doing so they have become partisan players mostly putting out a biased and left wing view, many times pushing complete fake facts or omitting crucial details. They have become ruthless in the way they are killing the truth in their quest to achieve political objectives. Of course the biggest proponent of this liberalism, which is not classic liberalism, although they have tricked many to think it is, is a far left open borders reincarnation of it.

Many in the media industry however have fallen for this propaganda and believe the globalist no borders “One World Order” narrative. As a result, they voluntarily, and often obsessively, push the open borders, anti white agenda of the man who currently owns and drives the agenda because he is the major funder of it, George Soros.

The agenda is aimed at creating a One World Government and to achieve their aims, these mainstream media outlets will stoop to any tactic that goes against the ethics of journalism, like creating double standards, putting out narratives and not factually reporting, outright fake news etc. Just think of the way CNN supported the notion that Trump was Vladimir Putin of Russia’s puppet and colluded with him. The liberal media has become infected with the madness of the Left of today.

In South Africa, the entire “anti-apartheid” movement was in fact a testing ground for this globalism, and we still are very much part of the liberal agenda of open borders with Ramaphosa, who has been in the thick of it since 1994, meeting George Soros in New York in 2018. Julius Malema and the EFF also support an open borders agenda for Africa and wants Africa to become like the EU, a federal state. George Soros has his eye on South Africa and the Soros linked Media Development Investment Fund (MDIF) is in the process of buying South Africa’s Mail and Guardian newspaper and online news site.

The other major news groups all focus on the black market and are mostly owned by non white businessmen. The Independent Media group is owned by Zuma supporting businessman Iqbal Surve – he bought the group with money from the Public Investment Commissioner and never repaid the loan. The Lebashe group of black businessmen owns the other major English speaking news group with titles like the Sunday Times. The Naspers group of newspapers is known for also being liberally inclined. It’s Afrikaans newspapers of course only have a limited readership being Afrikaans, so even their slightly more honest and factual reporting has a limited readership.

The media in South Africa regularly create firestorms when a white person can be in the cross hairs, like the Vicky Momberg case, but they are strangely quite and subdued when a genocidal racist, and criminal accused in numerous cases, like Julias Malema, says the most outrageous thing. More Malema hate speech came last Sunday. Predictably there was no outrage by South African or international news groups. On Sunday Malema said : “As black people, we kill Nigerians, accusing them of selling drugs and we kill Zimbabweans accusing them of stealing our jobs. Yet, the white man committed a genocide against us, took land, raped our mothers, killed our child in Coligny for picking up a sunflower; they kill our people saying that they have mistaken them for baboons. You’re even afraid to collapse the statues of white people. Why? Because you hate yourself. Black people in South Africa, in Africa and in the diaspora, we are all the same, we are all facing the same struggle.”

Another string of hateful race generalisations, not to mention hate speech (real threats of imminent physical violence). Will there be an outcry? I'll wait a while.

Helen Zille accused Malema of actual hate speech, going so far as to say it would meet with the narrow definition of actually inciting harm.

She said there had been a shortage of outrage in mass media after Malema’s speech in the North West where Malema was speaking at a by-election rally on Wednesday to elect a new council in Mamusa, after the municipality, like so many others in SA, was dissolved and placed under administration last year. No doubt a new batch of corrupt officials will be elected with the same inevitable result.

The biggest irony of all is that it is black people that have killed the most black people and even sold them as slaves, throughout history. Even to this day, the perpetrators of the 56 murders a day in South Africa are almost exclusively black.

and also: Will Bantu Supremacy in South Africa Spark Another &#8220;Rwandan Genocide&#8221; Which Was Also Perpetrated by The Bantu?