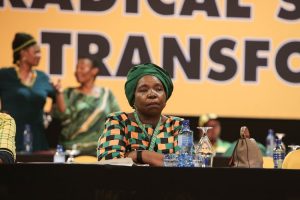 After losing a bruising battle for the presidency of the ANC in December, the former African Union Commission chairwoman has apparently told Ramaphosa she wants to step down as a  National Assembly member.

According to ANC sources, Dlamini-Zuma told party bosses that she was “tired and had enough of politics”,  and wants to quit parliament.

However, she has indicated she would remain a member of the ANC’s top leadership structures —  the national executive committee and the national working committee.
It is understood that Ramaphosa asked Dlamini-Zuma to stay on, saying he needed her services in government. Although this was a signal that Ramaphosa intended to appoint her to his cabinet, Dlamini-Zuma apparently said that she was not interested in becoming a minister or a committee chairwoman in parliament.

An NEC member sympathetic to Dlamini-Zuma said it was a bad time for her to step down because she could be seen as “sulking” over the result of the ANC conference.

“I don’t think it would be a strategic move for her to leave parliament. It would create an impression that she’s angry about the Nasrec outcome,” he said.