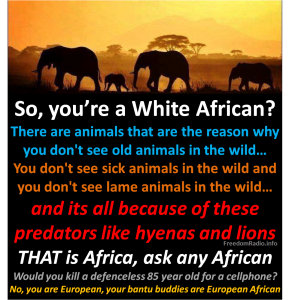 WE DO NOT HATE WHITE LIBERALS– WE SIMPLY DESPISE THEM!!

A COW had to suffer through the pain of having her body parts hacked off with an axe – while she was alive. The National Council of SPCAs said on Monday it was appalled by the actions of black bystanders at an accident scene at about 6.30pm yesterday evening.

Inspector Annette Muller of the King Williams Town SPCA in the Eastern Cape responded to an emergency call involving a cow that had been hit by a vehicle on the N2 Highway in Breibach‚ outside the town. As the King Williams Town SPCA arrived at the accident scene‚ African bystanders were busy brutally butchering a cow that was still alive. Black bystanders were using an axe to get pieces of meat from the animal. One of the animals’ hind legs were already viciously removed.

“I shouted at them to stop cutting the cow. I tried to push them away but they would not stop. I have never in my time with the SPCA heard a cow bellow like that from agony. All I wanted to do was end the animal’s suffering‚”
said an emotional Inspector Annette Muller of the King William’s Town SPCA.

The national council said they found it “incomprehensible that these people acted without any compassion and tortured an animal to claim the meat‚ ignoring the pleas of the SPCA Inspector”. “We commend Inspector Muller for her brave intervention and for taking humane action to end this poor animal’s suffering.

THIS now became a culture in the “New” South Africa since the 1994 illegal hand-over of the country to a terrorist regime- where black thugs – on a continuous basis- trespass on especially white farms- and hundreds of animals were then butchered the most horrendous ways Tanganjika-style.

In Kenya and Tanganyika in the early sixties this was common practice by the Jomo Kenyatta Mau Mau gangs to brutally slaughter animals on white farms this way.

Since the Neanderthal-minded ANC despots hi-jacked South Africa in 1994- Africa extended it’s sick tentacles into a once first world country- and today this also became common practice in the land.

First the hapless animal’s tendon’s were slashed with a machete to prevent it from escaping- then chunks of meat are hacked-off the still suffering animal. Can those liberal vermin please explain to us how can you ever classify such barbarism as “human?”

VARIOUS PICTURES TAKEN ON FARMS WHERE BLACK BARBARIANS ATTACKED HAPLESS ANIMALS IN THE MOST HORRENDOUS WAYS TO FEED THEIR EVER CONTINUING GREED. BUT THE MAIN STREAM MEDIA AND WHITE LIBERAL TRASH WILL NOT REPORT OR CONDEMN SUCH ATROCITIES- FIRSTLY BECAUSE IT WAS DONE AGAINST THE LIVESTOCK OF A WHITE,- SECONDLY BECAUSE THE PERPS WERE BLACK- AND THIRDLY BECAUSE IT WILL BE ” POLITICALLY INCORRECT.” 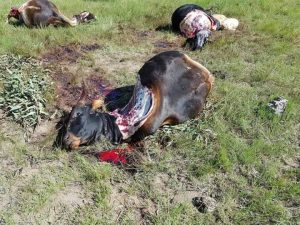 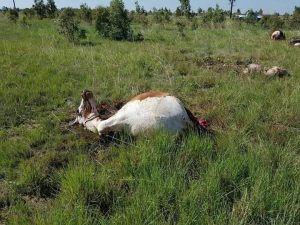 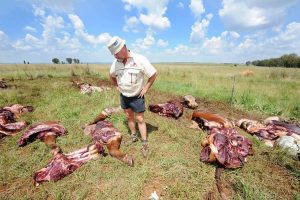