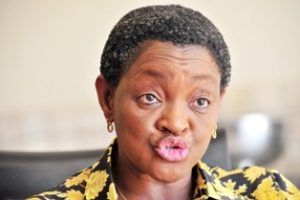 Amid rising speculation that controversial former minister in the Presidency for women Bathabile Dlamini will become an ambassador, to a country so far unknown, department of international relations and cooperation (Dirco) spokesperson Clayson Monyela could not be drawn to comment.

Meanwhile, the DA has threatened to take the president to court if she is indeed appointed to an ambassadorial post.

The Daily Maverick was among publications who reported early this month that Dlamini was among six former ministers tipped to be appointed as ambassadors, a list also reportedly including Siyabonga Cwele and Nomaindia Mfeketo.

According to the letter, the party will attempt to drag the president to court if Dlamini becomes an ambassador. The letter argues that her conduct as a minister was “reckless and grossly negligent”, and that her appointment as an ambassador would, therefore “constitute an irrational, unconstitutional and untoward decision”.

The letter says making Dlamini an ambassador would prove that “ambassador positions are reserved for those politicians who have failed their country and who have been proven to be guilty of misconduct, inter alia, during their term of service in high executive office”.

The DA believes Minister of International Relations Naledi Pandor’s answer in parliament to a question from one of its MPs about whether or not Dlamini might indeed become an ambassador betrayed that her appointment was on the cards.

While Pandor said ambassadors were appointed by the president, not her, she added: “but seeing that I’m smiling, I’m sure you know why I’m smiling”.

Twitter, meanwhile, seemed to show rare consensus over the possible appointment of the former minister. It would not, according to multiple users on the platform, be a good idea.

If Papbek Dlamini is made an Ambassador, it would be the most embarrassing appointment in the history of South Africa, surely government isn’t dumb enough to make such an appointment, but then nothing surprises us any more with the ANC decisions.