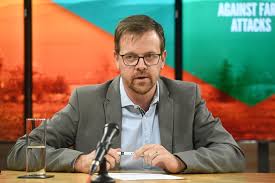 The AfriForum deputy CEO argued on international TV that it’s ‘less condemnable to kill a white farmer’ in SA than other forms of crime.

Ernst Roets, deputy CEO of minority rights group AfriForum, is currently in the United States to promote some of his organisation’s causes.

Roets landed an interview with conservative radio host Todd Starnes on Fox News, discussing farm murders and land expropriation without compensation, he once again discussed these issues in an interview by Israeli 24-hour news channel i24, which has studios worldwide, including one in New York’s Times Square, at which Roets spoke to South African-born Michelle Makori.

He began the i24 interview by disputing AgriSA’s stats, included in a report released last year, which stated that farm murders are at a 20 year low.

Roets said farm attacks are at a “13 year high”, adding that AfriForum has “the statistics” to back this up. Roets conceded that farm murders have declined (The AgriSA stats said that attacks had increased slightly but that murders were at a 20 year low), but attributed this to South African farmers being “more vigilant and protecting themselves”.

Roets said his concern is not only the “sheer number” of farm attacks but their brutal nature, and said the issue is “a bigger thing than just the ratios”.

According to Roets, in South Africa there is “a climate in which violence towards farmers is being romanticised by politicians”.

He argued that it’s “less condemnable to kill a white farmer” compared to other forms of violence such as xenophobia.

Roets wants farm attacks considered a “priority crime” by government, saying other forms of crime such as rhino poaching and cable theft already have this status.

“Our leaders should stop singing about murdering people,” he told Makori, saying not only Julius Malema but former president Jacob Zuma had been seen publicly “singing about shooting farmers”.

Singing of these songs is a “regular pastime in South Africa,” Roets said.

Roets is likely referring to the controversial song Dubula iBhunu, containing the words usually translated as “kill the boer”, which Zuma and other ANC leaders have sung in the past, leading to a hate speech charge laid against Zuma in 2012. The party had promised to stop singing the song in 2010.

More recently, the song is mainly associated with Economic Freedom Fighters (EFF) leader Julius Malema, who has been the subject of various cases as a result of singing it.

The Human Rights Commission (SAHRC) found earlier this year that the singing of the struggle song did not constitute hate speech as the song was “figurative and political” and “does not call for the killing of boers”.

AfriForum rejected this finding and said they would oppose the ruling.

Curiously, at times the EFF leader and his supporters have been seen singing what appears to be a parody of the song with the phrase “kiss the boer” substituted for “kill the boer”.

It has been argued by some that the song has been misinterpreted, with Gwede Mantashe quoted by the University of Cape Town’s Joelien Pretorius in a research paper that “ibhunu” is a metaphor for oppressor.

“When we talk [about] amabhunu, we were not talking [about] whites, we were talking about the system [of apartheid] … The biggest problem I have is when journalists interpret (Dubula Ibhunu) as ‘Kill the boer, kill the farmer’, which is a vulgarized interpretation of the song”, Mantashe said.

Turning to land redistribution, Roets acknowledged the need for some forms of land reform but said he considers it “just plain racist to say the colour of your skin determines if you are a legitimate owner of land”.

The ANC government, according to Roets, “have these ideas and they have these proposed outcome” regarding land reform but “there’s no link between the two”.

Roets says explained what he believes the SA government’s position is: “We’re gonna take property rights, we’re gonna start taking people’s property, but it’s going to be good for the country,” which he said is “like saying we’re going to expand KFC but no chickens will be hurt in the process”.

Roets claimed in the interview that South African government leaders consider people such as Zimbabwean former president Robert Mugabe and Venezuelan former president Hugo Chavez heroes while simultaneously saying that they would be able to implement similar policies without it damaging the economy.

Roets told his interviewer he had met with “a lot of people on the hill, including “media and think tanks”, to “speak out” about what his organisation believes is happening in South Africa.

He said he wants to convince the US government of the “different ways of putting diplomatic pressure on the South African government”.

“We believe there are important reasons why the US should take a stance on what is happening in South Africa.”

AfriForum has lobbied in the US before, with CEO Ernst Roets telling the Sunday Times that he believes his organisation has influenced US President Donald Trump to take an interest in the land situation South Africa.

“I believe our trip played a role,” he said.

According to Ramaphosa, “fringe groups” lobbying in the US have led to Trump’s views on the topic, which the South African president called “ill-informed.”

President Cyril Ramaphosa said during a Bloomberg interview there was “no killing of farmers or white farmers in SA”, a statement which was harshly criticised by lobby groups including AfriForum and also debunked on Africa Check.

The fact-checking site said while the fact that “people on farms and smallholdings in South Africa are victims of murder is not debatable” it’s “unclear” if claims by groups such as AfriForum that farmers “are murdered at a higher rate than other South Africans” are true.

Following an outcry after the Bloomberg interview, Ramaphosa’s spokesperson Khusela Diko said Ramaphosa was simply dismissing Trump’s referral to large-scale killing of white farmers and not necessarily denying that some white farmers were victims of violent crimes.

Presidential spokesperson Khusela Diko clarified that Ramaphosa’s comment was a “direct response” to Trump’s claim of “large-scale killing of farmers”. Diko said this was “a characterisation everyone knows holds no truth in South Africa”.