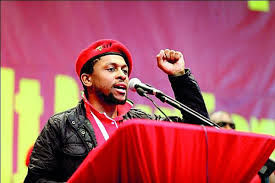 The party’s national spokesperson says they would advocate for the song’s removal from the anthem even if it was sung in Sesotho.

EFF national spokesperson Mbuyiseni Ndlozi took to Twitter in an attempt to clarify his party’s stance on the proposed removal of the part of the South African national anthem that is an abridged version of Die Stem, the country’s anthem under apartheid.

The question, asked by a parody account taking its name from prominent lawyer advocate Tembeka Ngcukaitobi, with the person behind the account saying he directed the question at Ndlozi as he had been blocked by EFF leader Julius Malema, was why the EFF was advocating for just the Afrikaans part of the anthem to be removed and not also the English part, as English was a “colonist language that also perpetuated violence in our history”.

Ndlozi’s answer was that the party’s desire to have the Die Stem section of the anthem scrapped was not based on language. The spokesperson said the EFF wanted “Die Stem gone” and would want this even if the song were “sang in Sesotho”.

He made a distinction between the party’s desire to see Die Stem removed from the South African National Anthem – presumably because of its association with apartheid – and “the conversation about Afrikaans”.

The party has called for Afrikaans to be scrapped as a medium of instruction at certain universities.

The youth division of Afrikaner lobby group AfriForum laid charges against the EFF on August 27 and 28, 2018, after the party led a protest at two campuses simultaneously – the Potchefstroom Campus of the North-West University (NWU-Pukke) and the Bloemfontein Campus of the University of the Free State (UFS-Kovsies), holding up banners with slogans such as “fotsek Afrikaans” and “down with institutional racism”.

The EFF was also among organizations calling for the scrapping of Afrikaans as a medium of instruction at the University of Pretoria, sometimes called Tuks, in 2016.

More recently, EFF leader Julius Malema reacted to a tweet from Finance Minister Tito Mboweni says the scrapping of Afrikaans would be a mistake by telling Mboweni that he was “becoming too much now”, adding that in his view it was “no longer a joke”. 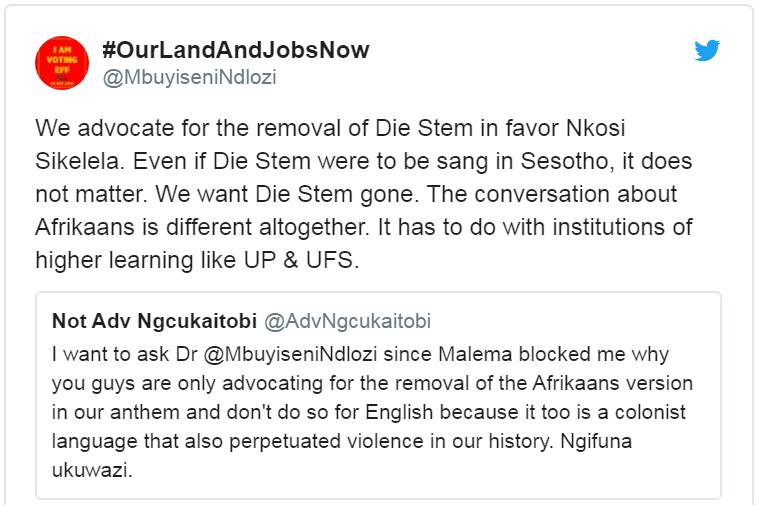