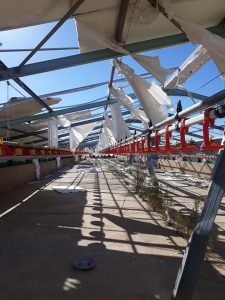 Driving outside Modimolle with my son, I was shocked to stumble on this abandoned chicken farm…It looked like a once productive farm

I was told by the neighbour it was given to a comrade by the ANC government. The comrade never lived on the land. These chicken houses are usually R1.5 million for a single unit – there were several of them. It looked automated, fully computerised. The greedy comrade in a sickening betrayal of his people and country sold the chickens and abandoned the farm

The comrade now stubbornly refuses to hand this land over to black South Africans for more productive development.

The ANC appear not to care when productive land sits idle. Is our government sitting on hundreds of thousands of square kilometres of land?REFUSING to make anything available to our suffering and disadvantaged people who desperately need this land, because clearly this wretched and corrupt government, and this filthy comrade do not value it.

Dear ANC – if you can see past all your corruption and greed for just a moment, and hold to your commitment to the suffering citizens of SA … that is if you truly care for the impoverished and disenfranchised citizens of our country.

The word corruption, neglect, ineptitude and brazen arrogance are synonymous with this floundering ANC National Government — is it not time to hold them accountable, brothers and sisters?

-V. Mosehla
This report does not necessarily reflects the opinion of SA-news.