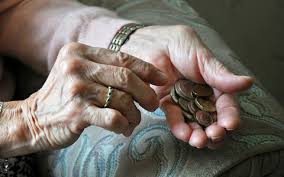 The party’s manifesto hints at targeting pensions through prescribed investments, ‘which will see half the population’s money used to bail out failing entities like Eskom’.

The prescribed investments for pension funds hinted by the ANC in its 2019 election manifesto could lead to the collapse of South Africa’s pension funds and pensioners dying poor.

Explaining prescribed investments during a presentation yesterday, economist Mike Schussler said government would be able to dictate to fund managers where and how much of their assets to invest, be it in government bonds, bailing out crippled state-owned enterprises (SOEs), or even funding the previously proposed Russian nuclear power station project.

If this is done, added to the way SOEs were run into the ground and looted in the past, workers’ hard-earned pensions could ultimately be squandered.

“If your money is invested in Eskom and all this mismanagement and wastage is happening, Eskom will say ‘we do not have money to pay you back’ and then you get less or nothing of what you have put in. You are going to die poor,” Schussler said.

What went wrong at the Public Investment Corporation (PIC) could easily happen to other funds as decisions were made on personal or political interests, instead of that of members.

He said more money could have been lost at the PIC if not for the intervention and the commission of inquiry, saying three more years would have attracted “more crooks”.

“I think we would be in serious trouble because one crook would find out from his other mate and pretty soon every crook would be there. This shows how quickly things could go wrong,” said Schussler.

Detailing the scale of the potential impact, Schussler said there were 16.94 million pension accounts in South Africa, plus 0.5 million friendly society accounts, with paying members at 7.64 million, while 3.6 million were contributing to underwritten retirement savings.

“About 100 000 are deferred pension accounts and another four million are at present deferred (stopped paying for a reason but have assets in account). The best estimate is that the 16.9 million accounts represent about 11-13 million actual people,” Schussler said.

Nearly one in three South African adults, including pensioners, have some form of pension investment.

“Add dependants and it could be more than those presently formally employed. Prescribed assets will directly impact at least 11 million people and, with family members, at least half of the SA population,” Schussler said.

“Government would not go to the International Monetary Fund (IMF) for funds to bankroll its projects, because this would force them to constantly look over their shoulder, while the IMF sits in the Treasury and tells them where to cut spending,” he said.

The Institute for Race Relations yesterday unveiled a civil campaign to push back against the prescribed investment for pension funds, encouraging members to write to their managers to voice their disapproval.

Marius Roodt, IRR head of campaigns, said prescribed assets on pensions was part of a broader pool to expropriate assets, as lots of money has been lost and stolen, while the government wage bill skyrocketed and the sums needed to keep SOEs afloat were eye-watering.

Roodt said though they were not against land reform, they have long warned that expropriation without compensation would encompass more than just land, saying indications were that their warning could be prescient.

“With taxpayers squeezed for much more and turning to international lenders is politically unpalatable, pensions are the obvious target. The ANC have spoken about prescribed assets for a number of years, like expropriation without compensation, which has always been on the fringes of ANC policy – and it is now ANC policy,” he said.

ANC spokesperson Dakota Legoete could not be reached for comment.