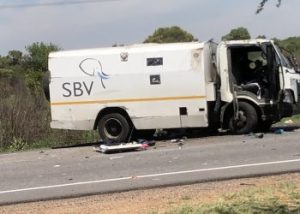 In Pretoria’s western area, at the Kit Kat Plaza, a cash van was robbed and at least one security officer was wounded in the incident.

The armed robbers did not hesitate to pull the trigger and took off with an unknown amount.

A police spokesman says one suspect fled in an ambulance,

On the same day, a second money van was pulled down by three armed villains about 50 kilometers north of Pretoria, on the N1 near Hammanskraal.

The wagon was forced by another vehicle to stop by driving into it, after which the gunmen acted.

The incidents were later described by a reader as still being a Black Friday event, because a lot of money was carried away by a small number of armed thieves.

Several people expressed the opinion that the two robberies were probably carried out by the same team of thieves, and that they had inside information.