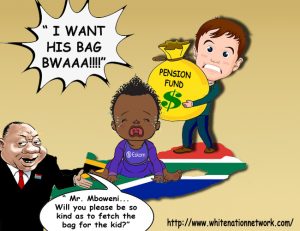 TAU SA expressed concern about the statements made on public forums by the ANC government where advocacy is being made to use SA’s pension capital for investment in so-called fixed assets. The size of the exit funds can make a huge impact on the national economy; according to the 2017 annual report of the pension fund registrar, the total assets of pension funds currently amount to R4.2 billion, where public sector pension funds (GEPF) make up 40% of the total amount.

According to TAU SA, the only two remaining assets on which the regime can further tarnish are land and pensions. Everyone is aware of the ANC’s plan to expropriate land without compensation. The writing is now also on the wall for South Africa’s pension money. Kobus Oberholster, Head of TAU SA’s Financial Wellness Desk says they can’t sit still and allow our people’s hard-earned pension, built up over decades, to be dumped into bottomless pits of Eskom, SAA, PRASA, Denel and others. Over a period of 25 years, the state institutions were exploited by the ANC cadres to state where it is in today. According to Oberholster, no foreign or local pension capital will suddenly cause these entities to change into economic success stories. He is convinced that the only outcome of such an application of pension capital will bring about immediate destruction of wealth.

In its election manifesto, the ANC promised to consider prescribed assets for pension funds as a strategy. Trade and Industry Minister Ebrahim Patel disturbed investors last week when he said at a pension fund congress that their role would be discussed after the State of the Nation Address. Patel also said that the government was not just looking for foreign investment, but pension funds had to invest locally in “real assets”. According to Patel’s spokesman Sidwell Medupe, direct investment in the productive economy is different from stocks and bonds. Medupe emphasized that Patel only referred to the “possible role of pension funds”. Patel’s comment follows on the statements of the ANC and South African Communist Party that the SA Reserve Bank should be nationalized.

SAIVR chief executive, Dr. Frans Cronje warned that Patel’s comments stem from the ANC’s commitment earlier this year to set up prescribed pension fund assets. Cronje argues that it is part of a program that will force pension funds to invest in government-approved projects. SAIVR has long warned that the government intends to use private pension funds to fund government spending. Cronje believes that the Department of Trade and Industry is aligned with the government’s commitment to expropriate land and other assets without compensation.

Cronje believes the panel has advise Cyril Ramaphosa on land reform and recommended an aggressive expropriation policy without any compensation. He argues that it will put the government on track to continue amending the Constitution and diluting private property rights which would allow it to seize virtually any asset without compensation. If the ANC were to continue to make their decisions and follow this route, it would be a plunder of private savings, wealth, investments and property whose consequences would be devastating.