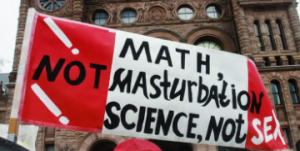 “What the Department of Basic Education plans to do is wicked and must be stopped,” said Meshoe via an e-mailed statement.