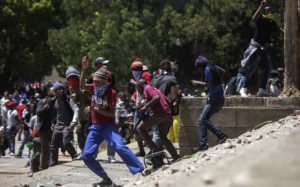 The damage caused at universities and training colleges by so-called Fees Must Fall protests has soared to nearly R800 million.

This has been revealed by Higher Education Minister Naledi Pandor in a written reply to a parliamentary question from the Democratic Alliance (DA).

The University of the North West suffered the highest cost in damages, followed by the universities of Johannesburg and KwaZulu-Natal.

At last count, the damage to higher education institutions as a result of the Fees Must Fall student movement was put at R600 million.

But new information provided to Parliament for damages between 2015 and 2017, shows that this figure has grown by almost R200 million.

The University of the North West has born the brunt of the damages.

The cost of setting alight the Mafikeng campus has cost the university R198 million.

The University of Johannesburg has suffered losses of R144 million and KwaZulu-Natal, R100 million.

The cost of torched buildings at the University of the Western Cape has been put at R63 million.

The universities of Mpumalanga and Venda are the only institutions of the country’s 13 universities not to have reported damages as a result of the student movement, which was aimed at putting a stop to tuition increases.