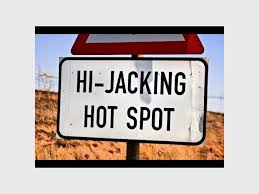 The South African Cities Network have released their analysis of crime in the country, and pinpointed the places which are notorious for hijacking crimes.

The very South African problem of hijacking still dominates the crime statistics in this country. One of the most harrowing and jarring experiences a person can go through is being forced out of their own car at gunpoint, or worse, being taken along for the ride.

Cape Town kept its acrimonious title of Mzansi’s “murder capital”, whereas Buffalo City in the Eastern Cape was deemed the worst place for robberies and assaults. The results were calculated using the most recent set of crime stats released by SAPS, and they’re based on the number of reported incidents per 100 000 people.

Where are you most likely to get your car stolen?
If we take a look at vehicle theft alone, we see that the overall trend is on a downward trajectory. Only Msunduzi and Buffalo City have shown a notable year-on-year increase. However, Tshwane and Johannesburg remain the most dangerous areas for theft, clocking more than 200 incidents per 100 000 citizens:

Hijacking hot-spots in South Africa ranked
However, it’s the hijacking stats that really leap off the page – and it’s more bad news for Gauteng again: Johannesburg takes the top spot as the most dangerous municipality for carjackings, and Ekurhuleni is third – the regional neighbours are split by eThekwini’s appearance in second:

Buffalo City may be notorious for car theft, but it is the least troublesome spot for hijackings out of all nine cities. Mangaung and Msunduzi are also on the right side of the scale, clocking less than 25 of these crimes per 100 000 citizens. Cape Town, Tshwane and Nelson Mandela Bay are all above the national average, though.

Photo: South African Cities Network
Those who compiled the report for SACN have suggested that the rise of hijackings in our major cities is perhaps due to the difference in difficulty between stealing a parked car, and one that is already running:

It is unclear as to why there have been substantial increases in carjackings in most cities, but this may relate to the introduction of more sophisticated vehicle security measures, which has made the theft of parked vehicles more difficult. Hence, vehicle theft syndicates have increasingly resorted to carjacking.”

This report does not necessarily reflects the opinion of SA-news