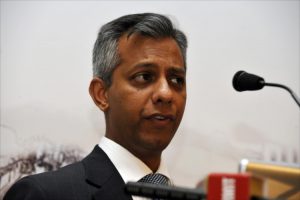 The Organisation Undoing Tax Abuse laid the charges on Tuesday morning at the Randburg police station.

The charges come after Eskom on Monday admitted to lying about payments which benefited the embattled Gupta family through the Trillian business group.

Outa’s chief operating officer‚ Ben Theron‚ said: “Anoj Singh has been invaluable for the Gupta empire and has bent over backwards to pave the way for lucrative deals.”

According to an affidavit by Outa’s legal head‚ Stefanie Fick‚ the majority of the case stems from the investigation conducted by Advocate Geoff Budlender into the Trillian companies and the businesses’ use of political inside knowledge to benefit the Guptas.

The Budlender investigation highlighted how Singh authorised multiple payments totalling R419-million to Trillian between April and December 2016 which did not go through Eskom’s books.

They were connected to Trillian’s claims that it was a subcontractor to McKinsey and Company which was an Eskom contractor‚ while there were no tenders or contracts supporting Eskom’s payments to Trillian‚ with no indication that Trillian did any work to justify the payments.

In her affidavit‚ Fick states: “It is also apparent from the Budlender report that there has to be a full-scale investigation into Eskom and Transnet.”

She said that Singh appeared to have authorised various payments from Eskom to benefit Gupta businesses and‚ in return‚ he benefited from Gupta-funded trips to Dubai.

Singh also authorised a R1.6-billion guarantee by Eskom to Absa bank‚ used by the Guptas to buy Optimum Coal Holdings in December 2015.

He was‚ according to Outa‚ apparently able to bypass the Eskom system to make payments of hundreds of millions to Trillian.

Singh was suspended in July pending Eskom’s investigation into him.