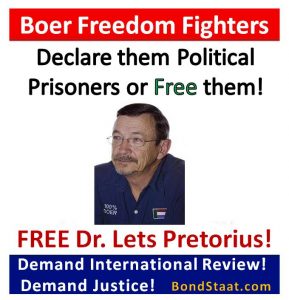 Speaking during the president’s budget vote in Parliament, Mthembu referred to some of the comments made by Malema recently.

Mthembu reminded MPs of the Boeremag, the Boer freedom fighters “that threatened our peace and stability by blasting eight bombs in Soweto”. Much like the ANC did in its heyday, blackmailing South Africa with bombs while supposedly negotiating at CODESA…

“After a long trial, lasting up to 2013, the Boeremag was sentenced to an effective 25 to 30 years in prison for their treasonous acts,” he said. The sham trial which disallowed crucial evidence from an intelligence agent, admitting that it was all a setup and entrapment, lasted over a decade. The accused’s human rights and dignity was severely, and still are being abused, and the trials which cost the taxpayer millions was seen as a revenge setup for mandela.

Mthembu said some might face the same fate, expressing regret that Malema had already left the House.

“Malema, wherever you are when this happens, don’t say we did not warn you,” he said.

If there is one thing the ANC knows very well, it is the political power of violence, the direction that Malema is taking, which is why the ANC will shut it down preemptively, like they did the Boeremag Freedom Fighters, by entrapping them.
After all only true supremacists like the ANC are allowed the use of violence to achieve political aims…