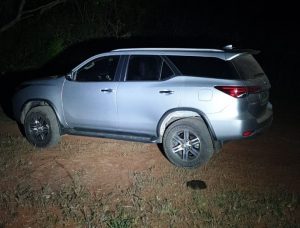 The AfriForum neighborhood watch in Wit Rivier, in collaboration with the SAPS today, found a Toyota Fortuner that was used during a farm attack.

Wit rivier – According to Hennie Bekker, the district coordinator of Lowveld AfriForum, a farmer was checking the border fences on his farm when he was robbed.

An unknown number of suspects jumped from another vehicle, arrested the farmer and then drove off with his vehicle. The farmer was left unharmed in the attack that took place at around 10pm last night.

The White River neighborhood watch was notified of the attack and robbery on Sunday evening just before midnight, and launched a search for the suspects who were allegedly armed.

Johan Pelser, the security chairman of AfriForum, confirms that neighborhood watch members spotted the silver Fortuner, without number plates, at a Total gas station in kaBokweni. Neighborhood watch members and the SAPS followed the vehicle and followed it to Masoyi. The vehicle was pulled over near Ga-Tshwene, after which two suspects fled on foot.

Bekker claims that suspicious bags were found in the vehicle with what police verified as explosives. The SAPS explosives unit was therefore summoned to the scene. There is a suspicion that the suspects may have used the explosives to commit other crimes in the area.

“No one has been arrested yet,” Bekker said.

Everyone was thanked for their good cooperation in the detection of the foot by Pelser. “People need to be more prepared and involved in their communities,” Pelser said.