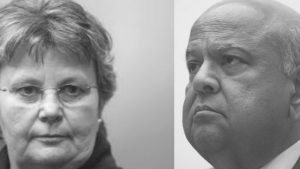 Former minister of public enterprises Barbara Hogan’s scheduled testimony before the commission of inquiry into state capture was postponed on Wednesday.

Hogan was set to appear before the commission — chaired by Deputy Chief Justice Raymond Zondo — on Wednesday, but the commission’s legal team made a last-minute application to have her testimony postponed. Zondo granted the postponement.

Pravin Gordhan, the current minister of public enterprises, was scheduled to appear before the commission on Friday but his appearance has also been postponed.

The legal team’s Advocate Thandi Norman — who presented the applications for postponement — said the team had not received witness statements in time for them to properly review them prior to Hogan and Gordhan’s testimonies.

Norman said Hogan’s full statement was only received on Monday.

She further added that though the team had received a draft statement from Hogan over a month ago, this initial statement was too narrowly focused for the commission to do its work.

Hogan’s full statement is about 300 pages with annexures, Norman pointed out.

According to Norman, the team only received a draft statement from Gordhan too and it is expected that the minister’s full statement will be received on Thursday, Norman said.

She contended these late submissions had not given the legal team enough time to review the statements and to give notice to those implicated in them, as the rules of the commission require.

Norman said the applications for postponement are “not made with the intention of frustrating the work of the commission”.

Judge Zondo was sympathetic to the legal team’s reasons for their application.

He conceded that notice was given in terms of the application, but added that the purpose of the rules of the commission is to ensure that “by the time a witness gives their testimony before the commission, anyone who has been implicated by that witness’s statement can be notified”.

Those implicated must also be given the opportunity to also present to the commission their version of events contained in the statements received by the commission, Zondo said. He added that the legal team must be enabled to pose questions to witnesses based on both versions.

“This commission is committed to ensuring that implicated persons are dealt with fairly,” Zondo said.

He added that this important to ensure that the findings made by the commission are equitable.

In her statement, Mentor alleged that in 2010 she was invited to a clandestine meeting at the Gupta compound in Saxonwold, Johannesburg, where she was offered the job of public enterprises minister by Gupta patriarch, Ajay. Hogan was the minister at the time.

Mentor told the commission that she was offered the job in exchange for her assistance in influencing the cancellation of the South African Airways route to Mumbai, India.

She first revealed the alleged Gupta bribe in a Facebook post in March 2016.She wrote: “But they had previously asked me to become Minister of Public Enterprises when Barbara Hogan got the chop, provided that I would drop the SAA flight-route to India and give to them. I refused and so I was never made a Minister. The President was in another room when they offered me this in Saxonworld [sic].”

Mentor said she turned down the offer. But Hogan was replaced anyway, by Malusi Gigaba — who has since fielded allegations of ties to the Gupta family, and of abetting their capture of the state, during his tenure at the helms of public enterprises, treasury and home affairs.

“Minister Barbara Hogan was not replaced by me because I declined the offer. She was replaced by Minister Gigaba and after his appointment as a replacement to Barbara Hogan, that route that I was supposed to facilitate the closure of, did become closed,” Mentor told the commission.

“I was not aware of this until many years down the line, but from media reports, it did happen. It did not happen under Barbara Hogan, it happened under Minister Gigaba as minister of public enterprises.”

The commission’s legal team suggested the hearing of Hogan’s testimony be pushed to November 12 and Gordhan’s be scheduled for three days later.