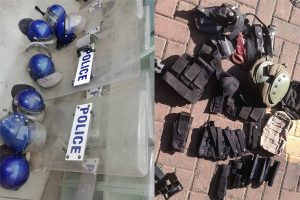 Police on Friday evening, 26 July 2019, traced and arrested two suspects in Hillbrow in a follow-up operation after police had earlier in the day recovered protective gear used by the South African Police Service Public Order Police at a block of flats in Hillbrow. The members found at Cape Agulhas building 24 SAPS helmets, 12 SAPS riot shields, and drugs including dagga, abandoned in a store room.

Police earlier in the day conducted an OKae Molao operation where a number of buildings in Hillbrow had been flagged as generating high volumes of contact crime.

Gauteng Provincial Commissioner of police, Lieutenant General Elias Mawela has called for an urgent investigation by a team of seasoned investigators at provincial level to establish how protective gear used by the Public Order Police landed in the wrong hands.

“The extent to which criminals have now gone to undermine the authority of the state is very disturbing. No effort will be spared in finding out the source of supply pending confirmation of whether indeed the gear is state-issued or replicas. Whatever the case, we believe the intention to own state property is still criminal,” cited Lieutenant General Mawela.

In a separate and unrelated incident in Douglasdale on Friday 26 July 2019, police also found amongst other items, police rank insignia and military style items.

A man believed to be a bodybuilder was arrested after firing shots at the police. The suspect is alleged to have fled a crime scene in Honeydew after shooting and injuring a taxi driver in an alleged road rage incident. The taxi driver was rushed to hospital while no police officers were injured.

Three firearms were recovered – two pistols and a shotgun, about 800 ammunition of different calibre firearms (R5, pistols, AK47 and shotgun), magazines, explosives and other dangerous weapons.

Further investigations will be conducted in relation to both Hillbrow and Douglasdale arrests to establish possible linkage to previous crime.