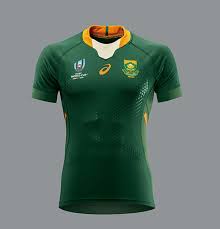 An revolt recently broke out with the launch of the Springboks’ new jersey for the upcoming World Cup, which will take place in Japan later this year.

The distinctive Springbok emblem, which is the pride of the Green and Gold, will no longer show off players’ breasts this year, but will be moved to the left sleeve. Many Bok supporters are upset with the new jersey’s design where the WB logo will be displayed on the right breast, Asics logo in the centre and the protea image above the players heart.

According to the clothing manufacturer Asics, the Springbok was put on the left sleeve because teams are forced to wear the “Rugby World Cup” badge on their right. On social media, many supporters have expressed their displeasure with the untimely change. Some of the comments on social media are: “Where’s the springbok? Should we call them the Proteas now? “; “So, the sponsor forced them to put the springbok on the shoulder … the sponsors took our pride away. Disappointed.”; “The Boks? So, where exactly is the Springbok emblem? It’s pathetic. ”And“ Please redesign the jersey, the springbok logo must be under the Asics logo. ”

Others say, “I love it.” “The feathers don’t make the bird just as long as they bring the cup home!”

On the twist, the downgrade is indisputably a blow to another legacy from the previous managed dispensation.

Read the original article in Afrikaans on Ditsem.net
This report does not necessarily reflects the opinion of SA-news.