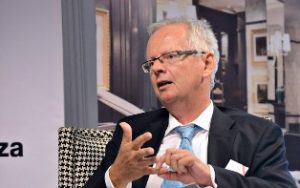 The ratings agency S&P Global, which has legitimately downgraded the country to junk status, since 2017, has warned the ANC regime, saying the path of recovery is not reachable with the clap of fingers.

The agency also points out that the possibility of another downgrade in two weeks is not ruled out because of the dire position in which South Africa finds itself.

The Managing Director of S&P Global Sub-Saharan Africa, Konrad Reuss, was a guest speaker at the Consumer Goods Council Conference in Johannesburg, which was held at the same time as Ramaphosa’s conference where billions of Rand’s promises were made, the bulk of which were made usually does not become reality.

Reuss emphasized that the agency could further downgrade the country in November’s assessment, which would further hamper investors and investment.