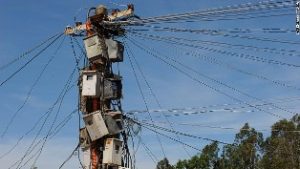 Soweto has been identified as the great sinner when it comes to outstanding debt to Eskom. The latest figures show that Soweto’s debt to the power provider is over R17bn.

Last week, technicians threatened that they would no longer perform repairs in neighborhoods where their security is threatened, areas effected including  Soweto.

Herman Mashaba, the mayor of Johannesburg, however, pleads for residents who pays for services and will now be disadvantaged by the “small” amount of residents who do not pay.

Illegal power connections are the rule rather than the exception in the residential area, and Eskom workers dare not dare to remove the dangerous and illegal drainage wires.

Information obtained shows that where drainage wires were removed, it was replaced with a new cables the next day.

-Read the original article in Afrikaans in Vryburger / 2019-07-17
This report does not necessarily reflect the opinion of SA news.