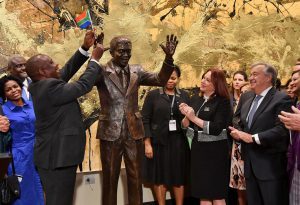 The South African taxpayer had to back up has yet again foot the bill for a statue of the semi-god Nelson Mandela.

This time the South African government donated an image of Nelson Mandela to the UN, and it was unveiled by Cyril Ramaphosa while attending the UN General Assembly in New York.

UN Secretary-General Antonio Gutteres has thanked South Africa for donating the statue to the UN.

What the cost of the image and its transport was by courier, is not known. However, the UN only decided a few weeks ago to accept the image after South Africa offered it as a gift.

The sculptors are two Afrikaners, André Otto and André Prinsloo, who usually do take three months to complete such an order, but they did this assignment in half the time. Observers say if “affirmative action” sculptors would have been instructed to do the jub, it would not have been completed in time.

Original article can be read in Afrikaans on Die Vryburger